Com Hem has today unveiled its best ever router, packing high-speed with next generation Wi-Fi technology. The router by Compal is faster, smarter and designed to provide greater coverage throughout the customer’s home.

According to an independent study conducted by Excentis, a leading provider of testing services for access network technology, the Compal CH7486E router is up to four times faster than the competition, with better performance at longer distances.

“We already deliver fast broadband speeds due to our state of the art network. Broadband customers tell us that WiFi performance is critical to them – they want superfast WiFi. Our new router delivers,” said Asanga Gunatillaka, Chief Product Officer at Com Hem.

The new Compal CH7486E is powered by the latest technology, including Beamforming and dual band delivering the best experience for faster downloads, clearer Voice over Internet (VoIP) calls and video streaming.

It has for example three antennas, Beamforming that is a smart, signal-focusing technology that improves WiFi connections and Dual Band that enables concurrent access to both 2.4 and 5 Ghz wireless channels.

Excentis benchmarking showed that the Compal modem was best in test when compared at various distances against the best routers currently offered by Telia and Bredbandsbolaget. Testing showed that the router delivered four faster WiFi throughput speeds and up to threee times better performance at longer distances than the competition. 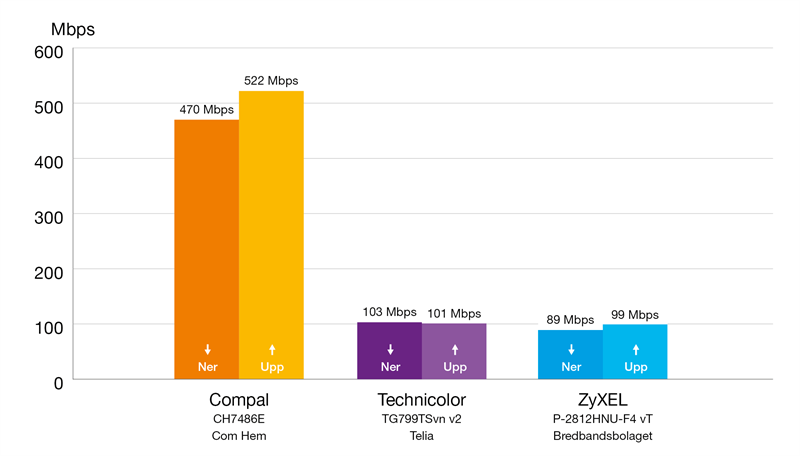 “We are really proud of our new Compal router. Independent testing has proved that it is up to four times faster than the best routers from our competitors thanks to its latest technology, as well as offering strong performance when devices are further away from the router”, Gunatillaka concludes.

The router will be included for all new Com Hem customers who subscribe to the 250 or 500 Mbps tiers from 28 January, 2015. It will also be available for existing customers to purchase from SEK 0 to 799 plus VAT, depending on binding.

In independent testing carried out by Excentis, Com Hem’s Compal router achieved the following results against the best routers from Telia and Bredbandsbolaget:

Benchmarking was conducted by Excentis at their test site, on behalf of Com Hem, over various distances up to 16m, using several different handheld and computer devices.

Com Hem is one of Sweden’s leading suppliers of television, high-speed broadband and fixed-telephony. Approximately 39%, 1.85 million, of Sweden’s households are connected to Com Hem’s network, with access to the market’s broadest range of television services. Com Hem offers attractively priced, high-quality services for television, high-speed broadband, fixed-telephony and has a competitive B2B-offer of broadband and telephony services. Com Hem was established in 1983, has approximately 1,000 employees and its head office in Stockholm. Operations are run through three subsidiaries; Com Hem AB, Phonera Företag AB and ITUX Communication AB. Com Hem’s shares are listed on Nasdaq Stockholm. For more information, visit: www.comhemgroup.com.